For a PDF version of this newsletter click here

Another month has been and gone and we are now in the final month of the year…. Doesn’t time fly by?!

We had a BBQ at Elmfield House on 3rd November. Colin did the food on the BBQ outside but residents ate indoors.

Several residents enjoyed some sparklers outside in the garden. 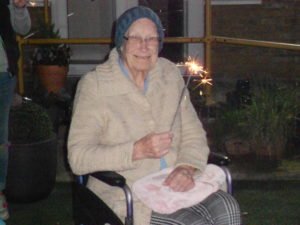 A group of residents and volunteers wrapped up warm and headed over to Bisley green for the annual Bonfire and fireworks.  We had fantastic views right next to the fire. The fireworks were wonderful and some were very noisy but beautiful colors.

Some residents chose to stay in the warmth of our porch to watch the fireworks without getting cold. 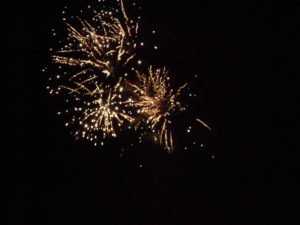 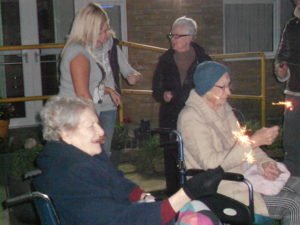 The organisers did us proud and feel privileged to be part of it. Everyone had a great time.

We had a Coffee morning with the Soldiers from Pirbright Camp on Friday 9th December. There were four Soldiers who came in their uniform to see the residents. They spent two hours at Elmfield and brought crosses and poppies for residents to write messages on which were taken to the Cenotaph.

The Soldiers shared experiences and memories of war with the residents who also spoke about their experiences.

John and Colin shared photographs with others and had vivid memories and experiences as did Alan.

The Soldiers and staff read out some war time poetry which was very moving and emotional.

The Soldiers have invited our residents to the passing out parades at the Camp which is very kind of him.

On Remembrance Sunday, a group of residents were escorted by staff to the Cenotaph across the road to pay their respects to the fallen Soldiers from all wars. There was a lovely service and Soldiers from Pirbright were also present.

The ladies from Bisley church have been to Elmfield and did their monthly service and Communion. Again, there was a good turnout. Their next visit will be singing Christmas carols.

Tina from High Kicks and Heels did her best yet performance in November. The audience were great and really interactive.

For the past three week we have had a group of year 4 school children from Bisley School coming to Elmfield for an hour on a Wednesday. This is part of our new partnership with the school. Each term, a different year group of pupils will be coming to the home for an hour per week over four weeks. They will do activities with the residents.

So far, the year 4 group have joined in with residents decorating cakes, coloring/ painting pictures, doing exercises, played bingo, spent some one- on- one time with residents finding out their life profile and playing the bean bag game. It is hoped that once the year 4 pupils leave us, we will keep in touch and become pen pals with the children who have been spending time with us.

In December, we will be doing Christmas decorations with them.

We have had our pub lunches throughout the month and as usual these have been thoroughly enjoyed. However, it is with much sadness that Pa, the cook from the Hen & Chickens has been asked to leave the pub at the end of November.

It is believed that the landlady will be taking over the kitchen as cook. Hopefully our fortnightly pub lunches will be able to continue, although we will miss Pa as she has been very kind towards us.

There is absolutely loads planned for December. Please see posters in the home and attachment of agenda.

We have the HG Wells Christmas Tea Dance, Bisley school choir, the Carol service at Guildford cathedral, the Church choir coming to Elmfield, the Bisley Cubs coming to the home to decorate the tree, Community tea afternoon, Resident’s Christmas party and much more.

It is hoped that as many relatives and friends of Elmfield get into the Festive spirit and join in with our festive activities and events. All are welcome!

Suzanne Cole has started her job role as Care team leader and is currently on induction.

We had Victoria Tucker join our night team, however she is having to resign due to changes in her husband’s work pattern.

Earlier this month, we gave a very warm welcome to Brenda Donaghey. She has settled in well and is a lovely lady with lots of stories to talk about. Brenda is originally from Wales and even at 90 years old has her accent.

November was a quiet month and we did not have any birthdays to celebrate.

The majority of our residents made the decision to have their annual flu vaccinations in November. This was done over two days as some residents initially refused.

Employee of the month

November’s ‘Employee of the month’ was awarded to Samantha Heathcote. She is a consistently hard- worker and completes all of her housekeeping tasks to a very high standard. She is reliable and always cheerful. Samantha will often help out with residents when the care staff are busy helping others. Samantha was highly influential in getting the Solider’s to Elmfield and her husband was one of the Soldiers who came to us. Keep up the good work!